A Constricted Refuge for Free Blacks

Many historians of the African American experience acknowledge that blacks lived in North America as early as the mid-1500s. Nonetheless, they favor a chronology that places Africans in America much later. The chronology begins with the arrival of 32 Africans to the Jamestown, Virginia, colony in 1619. This glossing over of the African presence in Spanish Florida reflects an Anglo-American cultural bias.

The evidence, however, points to an African legacy that predates colonial Virginia. Africans accompanied the explorer Ponce de Leon when he claimed Florida for Spain in 1513. And at least 40 were part of the 1565 expedition of Pedro Menendez de Aviles to establish the military encampment of St. Augustine, Florida. From that time on Africans free and enslaved were members of the town populace and helped to create a different dynamic of race relations.

The Spanish Crown valued Florida for its strategic importance. The peninsula played a major role in protecting its Caribbean transit routes for ships carrying gold, silver and other commodities from Mexico and Cuba. It established St. Augustine as a northern military beachhead with the use of African labor. By the 1680s, Spain relied on African slaves in Florida much as it did throughout the Caribbean.

Historians are beginning to rediscover the forgotten heritage of Africans in Spanish Florida. On February 7, 2015, for example, memorialists in St. Augustine initiated a “Remembering Ancestors” ceremony on  the 450th anniversary of the city. The purpose was to honor the Africans who died in the transatlantic slave trade. This oldest permanent settlement in North America was a designated port for slaves carried through the “Middle Passage” route from Africa.

While the Spanish Crown maintained a slave society, it also engaged in a policy of disruption against the British colony of Charleston. Part of its strategy was to undermine the expanding British slave economy by encouraging Africans to runaway from South Carolina. In the late 17th century, Spain held out the promise of freedom to blacks in the Charleston region. As the word spread, Africans in South Carolina and later Georgia trekked to Spanish Florida. 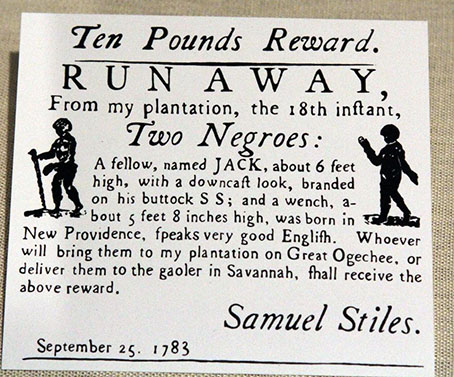 Many African runaways evaded patrols with the assistance of guides. Of particular help were the powerful Yamassee Indians who vied for regional power with the British, Spanish, Cherokee and Creek Indians. They fought a particularly brutal war against the British in 1715 and 1716. Many Africans fought alongside the Yamassee and were absorbed into the tribe.

African runaways in St. Augustine worked as laborers, soldiers and artisans. Blacks comprised about 400 members of the estimated 1,500 to 3,000 urban population. Some runaways gained freedom by converting to Catholicism and serving in the Spanish militia. Others were enslaved along with imported Africans by planters in Florida and Cuba.

Roger House is associate professor of American Studies at Emerson College and the producer of Victory Stride.